Buddha Jayanti, also known as Buddha Purnima, celebrates the birthday of Lord Buddha. Buddha Purnima falls on the full moon day in the Hindu month of Vaisakh (April/May). Lord Buddha was born on the Full Moon day in the month of Vaisakh in 563 BC. Here, it is interesting to note that Buddha achieved enlightenment and nirvana (salvation) on the same day (the Full Moon day). Thus, Buddha Purnima also marks the death anniversary of Gautam Buddha. Sarnath holds an important place in Buddhism as Gautam Buddha gave his first sermon at Sarnath. On the occasion of Buddha Jayanti, a large fair is held at Sarnath and the relics of the Buddha are taken out for public display in a procession.

According to Buddhist legend, his wife Yashodhara, his first disciple Ananda, his charioteer Channa, and the horse Kantaka on which he renounced his kingdom to ‘find some answers to life’, were all born on this sacred day. Even, the tree, called Bodhi tree, under which he attained nirvana was also believed to have been created on this day. And it was on this day Buddha chose to preach his first sermon at Varanasi, or, Benaras, in India.

Birds are freed from cages. Fruits and clothes are distributed among the sick and abstinence is observed on eating meat.

The Bodhi tree is revered. Its branches are decorated with garlands and colored flags. Rows of lamps are lit around the tree, and milk and scented waters are sprinkled on its roots.

The rituals include prayers, sermons on the life of Gautam Buddha, continuous recitation of Buddhist scriptures, meditation by monks and devotees, and worship of the statue of Buddha.

Offerings of incense, flowers, candles and fruit are made by believers, who prostrate several times in front of the idol.

On this Holy day the Buddhists bathe and wear only white clothes. They gather in their viharas for worship and give alms to monks. 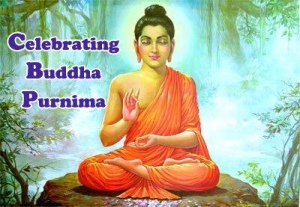 Buddhist Pilgrims come from all over the world to Bodh Gaya to attend the Buddha Poornima celebrations on birthday of Buddha. The day is marked with prayer meets, sermons on the life of Gautam Buddha, religious discourses, continuous recitation of Buddhist scriptures, group meditation, processions, worship of the statue of Buddha and symposia.

The Mahabodhi Temple wears a festive look and is decorated with colourful flags and flowers. On this Holy day, the Buddhists bathe and wear only white clothes. They gather in their viharas for worship and give alms to monks. Many spend their entire day at the vihara listening to discourses on the life and teachings of the Buddha or invite monks to their homes.

On Buddha Purnima, Buddhists eat kheer, rice cooked in milk and sugar, which they share with the poor. They set up stalls in public places to offer others clean drinking water and also show kindness to animals.

One thought on “Buddha Purnima”

Help us to grow

The stories posted here are not written by us. These are popular, famous and old stories. If any copyright material then contact us.